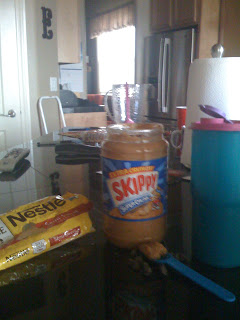 Heard the news from Sister, & have been watching the news & reading the occasional PB Article, wondering if & when I would hear the ‘bad news’ that my snack of choice, Skippy Extra Chunky Peanut Butter was on the roll-call of salmonella laced products. Alas, nothing yet.

And so, today, I celebrate with a spoon, a jumbo jar of Skippy, a plethora of Hershey’s semi-sweets, & a fresh-pressed cup of java. Ahh. Life is beautiful. 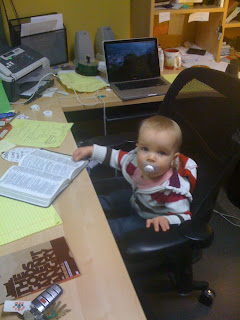 And if that wasn’t enough to bring me joy… all I have to do is walk into my office, & more often than not, meine Nichte, Ellie, is usually around to bring joy, a steady stream of yet unintelligible words, & a unstoppable quest for nanananana… here she is sitting at my desk reading my Bible… Ahh. Again….life is beautiful…

Last Saturday was the Memorial service for Francisco Aranda. I spent the majority of the time at the memorial cracking up over memories… discussions, my attempts to practice Spanish, stories about pre-Disneyland Anaheim, & my favorite, Francisco’s very practical take on theology… I’m truly happy that we have a hope past just what this life offers, as well as the promise that we’ll see each other again. His family has put together a memorial website & online guestbook – check it out HERE.

My behavior, thoughts, actions, choices have consequences: not just for me, but downstream – the people who’s lives I directly impact & influence, as well as those that I may not know, but may be equally affected.

My old district Supe, Robby told me a story before I came to Reno to pastor:

The “Keeper of the Spring,” was a quiet forest dweller who lived high above an Austrian village along the eastern slope of the Alps.The old gentleman had been hired many years earlier by a young town councilman to clear away the debris from the pools of water up in the mountain crevices that fed the lovely spring flowing through their town. With faithful, silent regularity, he patrolled the hills, removed the leaves and branches, and wiped away the silt that would otherwise have choked and contaminated the fresh flow of water. The village soon became a popular attraction for vacationers. Graceful swans floated along the crystal clear spring, the mill wheels of various businesses located near the water turned day and night, farmlands were naturally irrigated, and the view from restaurants was picturesque beyond description.

Years passed. One evening the town council met for its semi-annual meeting. As they reviewed the budget, one man’s eye caught the salary figure being paid to the obscure keeper of the spring. Said the keeper of the purse, “Who is the old man? Why do we keep him on year after year? No one ever sees him. For all we know, the strange ranger of the hills is doing us no good. He isn’t necessary any longer.” By an unanimous vote, they dispensed with the old man’s services.

For several weeks, nothing changed. By early autumn, the trees began to shed their leaves. Small branches snapped of and fell into the pools, hindering the rushing flow of sparkling water. One afternoon someone noticed a slight yellowish-brown tint in the spring. A few days later, the water was much darker. Within another week, a slimy film covered sections of the water along the banks, and a foul odor was soon detected. The mill wheels moved more slowly, some finally ground to a halt. Swans left, as did the tourists. Clammy fingers of disease and sickness reached deeply into the village. Quickly, the embarrassed council called a special meeting. Realizing their gross error in judgment, they rehired the old keeper of the spring, and within a few weeks, the veritable river of life began to clear up. The wheels started to turn, and new life returned to the hamlet in the Alps.

Last November, the news of Pastor Ted Haggard’s immorality & drug use became public – it was devastating to him, his wife, his family, & to the church he led. This artcle about LAYOFFS details more of the long term consequences that are happening as a result of his choices.

No finger pointing. No accusations. My heart breaks. From Mark Cuban’s blog… Wondering who Mark Cuban is? Here you go.

Why am I such a suit hater ? I’m not a suit hater, I just could never think of any good reason for any sane person to wear a suit in the first place.

Exactly what purpose does a suit serve ? Why in the world are so many people required to wear a suit to work ? Do the clothes make the man or woman in the western world today ? Does wearing a tie make us work harder or smarter ? Is this a conspiracy by the clothing, fabric or dry cleaning industry to take our money ?

Or are we all just lemmings following a standard we all know makes zero sense, but we follow because we are afraid not to ?

What is the “Emerging Church?” What makes a church “Emergent?” Is there such a thing as a post-modern “style” of church? If so, is this “style” going to go/already heading towards extinction?

Found THIS ARTICLE by Scot McKnight– great & insightful primer on the “emerging, emergent, post-modern” – deals with the mystique, mythology, misconceptions, & other mis’ses…

Five Streams of the Emerging Church
Key elements of the most controversial and misunderstood movement in the church today.

It is said that emerging Christians confess their faith like mainliners—meaning they say things publicly they don’t really believe. They drink like Southern Baptists—meaning, to adapt some words from Mark Twain, they are teetotalers when it is judicious. They talk like Catholics—meaning they cuss and use naughty words. They evangelize and theologize like the Reformed—meaning they rarely evangelize, yet theologize all the time. They worship like charismatics—meaning with their whole bodies, some parts tattooed. They vote like Episcopalians—meaning they eat, drink, and sleep on their left side. And, they deny the truth—meaning they’ve got a latte-soaked copy of Derrida in their smoke- and beer-stained backpacks.

Along with unfair stereotypes of other traditions, such are the urban legends surrounding the emerging church—one of the most controversial and misunderstood movements today. As a theologian, I have studied the movement and interacted with its key leaders for years—even more, I happily consider myself part of this movement or “conversation.” As an evangelical, I’ve had my concerns, but overall I think what emerging Christians bring to the table is vital for the overall health of the church…