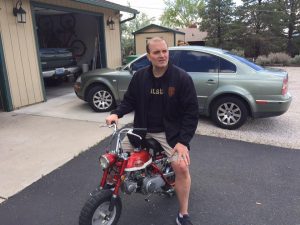 I was in 3rd grade & it was Report Card day. I remember this because Report Card day was a Big Deal at my house, because it meant my parents got to see how I was doing in school… & not just the Academic grade, (which was, of course, important,) but also my Citizenship grade… which may have been the most important one to my parents.

Well, as a 1st born over-achiever, I was already well on my way to developing my perfectionistic tendencies… & I had pretty well dominated all that 3rd grade could throw at me. I had A’s on top of A’s, & loads of extra credit. I remember distinctly my parents telling me that I’d done well & that they were proud of me. And, as a words of affirmation person, that was the only reward I wanted/needed, & was truly the only inspiration necessary for me to keep pursuing academic excellence.

My parents had other ideas – I was laying on the floor of the living room of our house on Upson Lane watching TV… it must have been a good show, because I can remember hearing the muted roar of what was obviously some time of motorized scooter or bike, & not even turning around or looking to see what the noise was. After all, the sound was a pretty normal one for our house… for as long as I can remember, my dad has had motorcycles/dirt bikes, & pretty soon you learn to kind of tune out the sound.

Not today. It got louder. Drew nearer. I even had to turn the TV up.

And then it was in the living room. A red Honda 50cc minibike. And my dad was riding it. In the house. And then he got off of it. And said, “Its yours.”

Mine. My very own minibike. I put on a helmet & immediately rode it down Upson Lane into Margot Circle, thereby incurring the wrath of several homeowners who did NOT share the joy I was feeling & called the police on me to make sure that such boundless joy was muted & relegated to the appropriate places, namely, far away from them.

I rode the minibike, my “hog,” every chance I got – soon after, we moved from Upson Lane to Golden Valley – its dirt roads, vacant lots, & general separation/distance from the City meant most of the world was my racetrack. It was joyous. I rode with friends, with neighbors, with my brother, by myself. I tried jumping it over puddles (& caught absolutely ZERO air.) The memories from a good portion of the next couple of years center on the hog.

And then I grew up.

Really, I don’t remember when I stopped riding the hog – it was probably when I realized that it only went about 25 mph… & it was so small. And I was more interested in baseball & football, & the unwritten rule was no motorbikes during the sports seasons. I think my brothers rode the hog too, but I can’t draw specific memories with them on it. I just knew that like many things from my childhood, my parents kept the hog in the garage with the thought that Someday they’d get it running again. For the grandkids.

Over the last few months, I’d heard a couple of stories about the minibike’s restoration. My dad found a guy who fell in love with it & had been working on it. No other details. Then Friday, I was dispatched by theBean to go to Carson City to pick up a barstool that she’d commissioned my mom to get for her (it’s a long story, but it involves multiple visits to ROSS stores all over Reno/Sparks/Carson CIty.)  I decided to turn it into a visit – to have some time to talk & have coffee with my mom in celebration of the impending Mothers’ Day. Near the end of my visit, my dad said, with a twinkle in his eye, “Want to see something?” We followed him into the garage & lo & behold! in the corner of the garage was the red Honda 50cc minibike… but instead of it being well-used, scratched up, & out of commission, it looked… good. Really good. I examined it closer & found that there had been a lot of work done. Engine. Gas lines. Other technical engine thing-ies. And then my dad started it. As soon as I heard the first roar of the engine I was transported back to being 9. I closed my eyes & listened to the engine purr & enjoyed the flood of memories that bombarded my mind.

And then he asked, “Do you want to ride it?” As silly as it sounds, I hadn’t even considered it, but as soon as I knew I had the opportunity, I wanted to. I tentatively climbed aboard, (one doesn’t just cavalierly mount a Honda 50,) & re-familiarized myself with the gears, hand & foot brakes… & I took off down the driveway.

The hog roared in 1st gear toward the chosen challenge – the hill above my parents’ house. I kicked it into 2nd gear, & felt a tiny surge of power as it climbed the hill, slowly picking up speed. Felt like I could ride for days. The sound & smell of the bike, the feeling of the wind on my face, the beautiful day, the memories…

Next thing I knew, tears were streaming down my face, whipped & dried by the wind. I don’t know what happened, but riding that minibike for those 10 minutes did something in my heart & I felt a joy that was so foreign yet familiar that I almost didn’t recognize it… a leftover from days where I used to do things Just Because they were Fun. What happened to that boy? I miss him.