One of the things that we really wanted to see on our visit to Roma was the Vatican City – & in it, the Sistene Chapel & St. Peter’s Basilica. We went on Sunday afternoon & found out that everything in the Vatican City closes in the early afternoon, because there is very little (if any) electrical lights used in the buildings – everything is lit by natural light… which wanes in the afternoon, splaining why the buildings close… 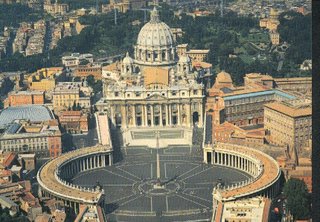 This is an overview of the St. Peter’s Complex – I didn’t take the picture, obviously, but I thought it was important to show the size & scope of the Basilica Courtyard. It truly is monstrous. It was built over a 126 year period (1500-1625-ish) & was financed largely by the sale of indulgences (see my Travel Blog
for more detail on this…) 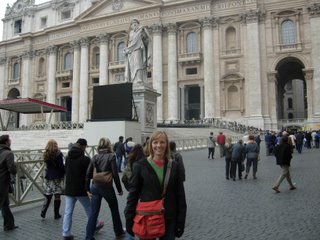 The massive courtyard allowed us to get lost in it – there were so many people in the courtyard, it still seemed like just a few; the only crowded spot was the ever growing line leading into the Basilica. 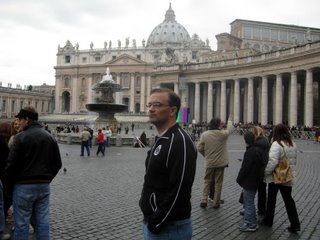 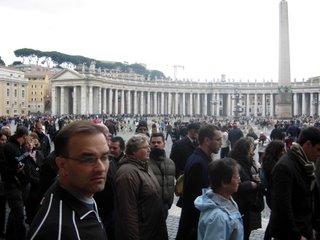 It was while we were standing in line to get into the church that one of Roma’s finest pigeons flew overhead and dropped a load on my black Eintracht Frankfurt jacket. Joni thought it was incredibly funny that this flying rat had deposited its doo on me, though I was not nearly as amused as she was. She later made up for her amusement by helping me to clean my jacket in our hotel room. (Translation: she did it for me. I attempted to clean it & evidently don’t know the first thing about dealing with pigeon poo. It also didn’t help because I was using Euro TP to clean the jacket, which actually ended up falling apart & just spreading the poo-stain all over my left shoulder.) Standing in line to get into the church was interesting – I counted at least 7 different languages being spoken around me: Portuguese, French, Spanish, American, Italian, & a couple that were definitely former Soviet-bloc… it made the experience that much more surreal – kinda like standing in line for a ride at Disneyland. There were several people that kept trying to jump into the line & take cuts. I had fun watching how the people from other places handled the “cutters” – some simply ignored the people; others made quiet comments that were still very obviously about the people doing the cutting; one couple observed the people cutting in front of them & then walked right past them & stood in front of them in the line. In case you’re wondering, I just chanted “Cutters!” & pointed my finger until embarrassment caused my wife to make me stop. 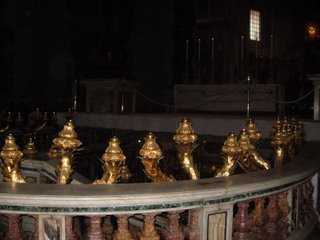 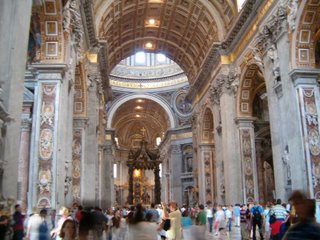 The Basilica itself was absolutely extravagant. It was all gold or gilded, with the pungent smell of incense permeating the huge room, (that can hold 60,000 people in the building that spans almost 6 acres.) I can completely understand why Luther was so concerned with how this cathedral was financed – it is so amazing, even now in the 21st century. I can only imagine how jaw-dropping this must have been back in the day, especially when compared with the abject suffering & extreme poverty of the majority of society. 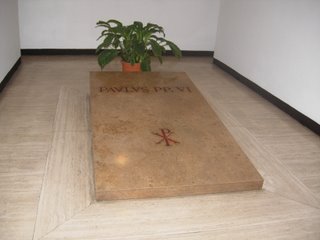 The most impacting site I saw this day was the tomb of Pope John Paul Deux, located under the Basilica itself. Not because of how the tomb looked – it was simple, yet elegant, using the “Chi-Rho” symbol that I personally like so much I got it tattooed on my left shoulder… (The attached picture is of the tomb of Pope Paul VI, which was a dead ringer for PP2’s.) What stood out to me was the crowd of about 25 people that had gathered outside the tomb – they were mourning JP2 – crying, wailing, burning candles, writing notes… it was like he had just passed & the grief was still fresh. It was a sad moment to witness – sad, & also very hopeless feeling. It was awkward to witness, & felt darkly spiritual & eerie. We prayed through it. I wanted to take a picture of the tomb & the mourners, but thought better of it.