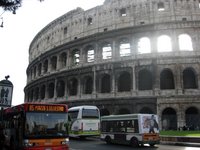 One of the regrets that I have from our trip is that we didn’t have the cord needed to upload photos. So, I’m going to be posting some of my favorites from our trip. Beings as I’m a history buff, it should be no surprise-ah that I am starting in Roma. Please bear with my insistence on using the names I learned for these places in Italia – I am merely entertaining my very own self with that.

My highlight, (besides the food and vino rossa, of course) was il Colosseo. All of the pictures in this post are from various points in, near, outside, over, by Roma’s most recognizable landmark. 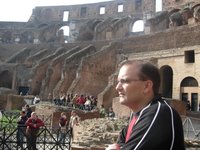 Il Colosseo was built starting in 70-72 AD, & took about 10 years to build. It was named the Flavian Amphitheatre after Emperor Flavius. The name, Il Colosseo was taken from a large statue, il Colossus, a statue thought to be of Nero, that had stood outside of the entrance to the amphitheatre. One of the things that I didn’t know about il Colosseo was that a good portion of the building materials for this monstrous (esp. for its time) edifice came from the sacking & destruction of Jerusalem. Of course, it only makes sense that quality building materials would be reused. But learning that it came from Jerusalem, & its destruction, which Jesus had prophesied, had a profound impact on me. 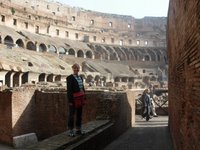 The Flavian amphitheatre seated between 50 & 80K people, & was built on the site of Nero’s palace with the intent of removing his memory. It was a part of the Roman elite’s attempt to keep the commoners pacified through the usage of the “Bread & Circuses” strategy. This means: they gave away free bread & held gladiatorial contests & other spectacles to entertain people. This was based on the idea that people that weren’t hungry or bored wouldn’t revolt against the government. Worked. “Other spectacles” used to entertain people often meant the public execution of Christians – official enemies of the Roman Empire because of their claiming Jesus Christ, a defacto refusal to claim “no other King but Caesar.” Christians were “creatively killed,” used as gladiator fodder, meal attractions for wild animals (by wrapping people inside recently slaughtered animal carcasses, then turning lions, tigers, & bears loose on them.) 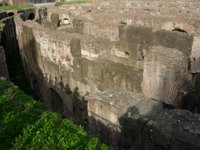 It was very emotional for me to be here. I couldn’t help but think of the men, women, & children who were led to the slaughter here; people who died terribly tortuous deaths because they refused to renounce Christ. They counted that the sufferings in this world didn’t compare with the promised glory revealed in us (Romans 8:18.) Seeing the remains of cells & holding areas that still dot the Colosseo grounds took me to consider those that were held inside. 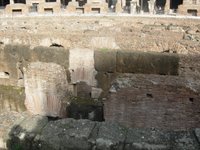 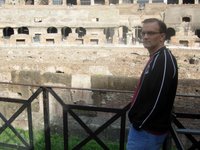 Il Colosseo was used for approximately 500 years, with the last official games held there well after the documented fall of the Roman Empire. It stands as a 2000 year old monument, but is much more than that. It’s a powerful symbol, almost like the cross. What I mean is that Christ died on the cross & forever it has become the symbol of His victory over death & hell – a stark implement of death that has become a reminder of life to Christ-followers. Il Colosseo is a symbol for me – a symbol of what it means to not “love this life.” To be faithful “even unto death.” To endure. To hold fast faith. A testimony of the faith of our fathers & mothers. A challenge to me to live a life worthy of the calling I’ve been called with, & also worthy of those of the family of faith I belong to.