One of the things that was a highlight of the trip was the food – the Bean took quite a few pictures to digitally capture many of the culinary masterpieces we had the good fortune of devouring. 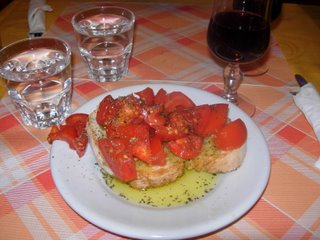 Simply put, the presentation, color, & texture made the food look almost too pretty to eat. Almost, says I, but not quite. We found a way – though there really wasn’t any sort of “Thanksgiving ribs-fest, I’m stuffed to the gills” type of feeling. I think it was because just about every meal took such a long time to finish – the slower we ate, the full-er we felt; therefore, the less beautiful food that was consumed. 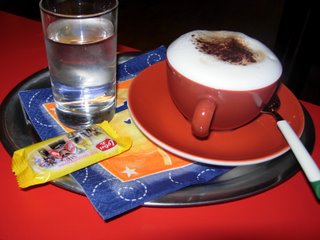 Even the cappuccino & coffee drinks looked incredible – there was even chocolate powder on top of the cappuccino’s foam that had been dispensed in the shape of a heart. Had to drink them somewhat quickly, as the temperature of the drinks was significantly lower than I am used to. 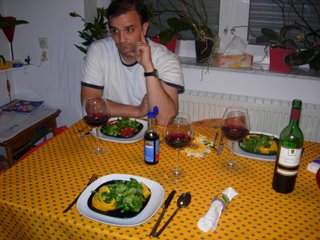 The best part about the food was that it was consumed in the context of spending time with others – the highlight of Roma for me were the leisurely meal times that the Bean & I sat across from each other, talking both about the deep things of life & the simple observations that the trip brought. Something that is easy to miss was reawoken by the time, energy, & focus given to each other – a great gift for any relationship, but especially if your love language is quality time. 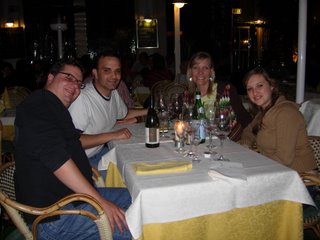 Developing relationship with people seems to happen better over food – there is a principle of fellowship that is released when we spend time with others, eating. Maybe its because we’re forced to listen because our mouths are full; perhaps its because eating is something that we have in common with every other human being in the world, regardless of our country or culture of origin. The food & customs of each are sure to be different, but also provide a source of bonding. My friend Johannes, featured below in the purple shirt absolutely loves to take us to restaurants that don’t just serve authentic German food, but that serve food for real Frankfurters. He gets a special joy out of watching Americans try to choke down “Handkase mit musik” which is basically the world’s most pungeant cheese, with a hard shell on it from marinating in vinegar, smothered with onions. (the “mit musik” means that the cheese/onion/vinegar combo causes flatulence.) The cheese tastes worse than anything I have previously tasted in my life; Johannes laughed his head off, & our friendship deepened. 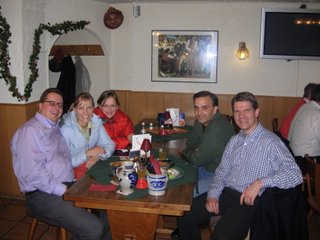 Something happens when we eat together that is unique. The meals & the people interactions are always the highlight of our time in Germany – & have resulted in life-long friendships starting & growing. And it doesn’t hurt that Germany makes the world’s greatest Hefeweizen – something that I’ve never found the equal of here in the States. More on the Hefe…

I’m inspired to eat with others more – & to make my meals something that aren’t just consumed as fast as possible on-the-way-to-somewhere. Rather, I want to utilize the time to invest in the lives of the people that God has put in my life. Especially the Bean.