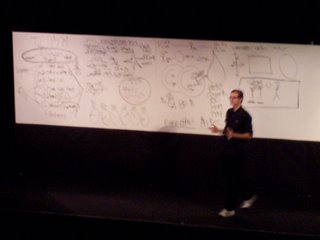 Friday night, the Bean, me, & some buddies piled into the EX & drove to Sacramento for a lecture. You may be wondering why, after enduring dr. brimley’s endless summer days, I would intentionally subject myself to YET ANNUDAH lecture, its because it was to listen to one of the more engaging speakers I’ve encountered: Rob Bell, the teaching pastor of Mars Hill in Grand Rapids, Michigan. (I totally kiped this picture of him from the blog of someone else that attended.)

The two hour lecture began in the ancient, near-Eastern Hebrew poetry known as Genesis 1, navigated subatomic particles, a visit to Flatland, the significance of numbers to Hebrews, SpongeBob, the myth of “the secular” & how, inevitably, humans degenerate into weighing their ultimate worth by what they are able to produce (what they do…) Bottom line, we have been made in God’s image, & that means something – part of which isn’t discovered until we learn to Sabbath.

The phrase that keeps bouncing around my noggin is: “God didn’t make us as Human Do-ings, but as Human Beings. It’s only in obeying God’s instruction for rest, play, & re-creation that we truly can be the humans we’re created to be.”

Another one is: “to be human is to be spiritual; there is no separation between secular & spiritual – everything is spiritual. We’re created to do all we do, words & actions, to the glory & honor of Christ.

I’m betting that this lecture will be a) turned into a book; b) put out on DVD; c) both. The vast amount of material discussed bears several re-visitis. In the meantime, I’m stewing on the Do-ing vs. Being, especially because the next place we’re going at Hillside (September & October) is into exploring the Sabbath rest.

4 thoughts on “Rob Bell: Human Do-ing vs. Human Being”