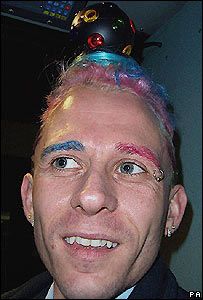 Saturday night fever: Mark Davis is ready for new year celebrations
A bus driver who sported a Christmas tree with lights on his head for a month has turned himself into a disco to see in the new year.
Mark Davis, 31 from Pontypool, south Wales, of Newport Transport, spent the festive season with a fully-decorated fir tree woven into his hair.

His new look sees him with a fully-functioning disco ball on his head, with “2006” shaven into his hair.

Mr Davis said: “I’m going to go even madder for the rest of the year.”

The style is topped off with metallic spikes and “2006” shaved into his hair.

His original Christmas tree style was popular with passengers and had led to world-wide media attention.

He added: “It went totally crazy. I’ve even been on a radio show in Canada.

“I’m world-renowned for my hair. The way it’s gone has totally blown me away.

“I haven’t had one miserable comment. The kids love it when they get on my bus and I’ve done it for charity.”

Mr Davis, who has previously sported hair designed like a football and a dartboard, plans to adopt further new styles in 2006 despite admitting his Christmas tree look had caused him problems sleeping.

He said: “I’ve been approached by another charity and I’m going to have a competition to design my hair.

“I’ve got something planned for Valentine’s Day as well.”

Mr Davis was sponsored by friends and family to take on the task, though he admitted that wearing the tree at night caused problems sleeping.

As well as the Christmas tree growing out of the top of Mr Davis’s head, the original multi-coloured style also included Santa’s face on the back of his head and holly.