My favorite baseball player calls it a day. I’ll miss him! 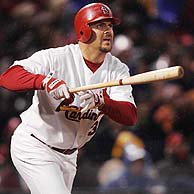 The St. Louis Cardinals outfielder announced his retirement to the St. Louis Post-Dispatch following Wednesday’s 5-1 loss to the Houston Astros in Game 6 of the National League Championship Series.

“I couldn’t even breathe,” the native of Maple Ridge, B.C., told the paper, referring to his final game played at Busch Stadium in St. Louis.

“All these emotions were going every direction. I knew it was it. I’m not coming back.”

Walker was caught looking at a Dan Wheeler pitch to lead off the ninth inning and finished the night 1-for-4 as the Cardinals fell four games to two in the best-of-seven series.

He walks away from the game at age 38 following an impressive 17-year career in the majors.

The 2005 season was tough on Walker, who was repeatedly bothered by neck and back injuries.

Traded to the Cardinals by Colorado late last season, he hit .289 in 100 games this season with 15 home runs and 52 runs batted in.

The left-handed hitting Walker struggled in the post-season, mustering only three hits in 28 at-bats (.107) with one RBI.

That’s a far cry from a year ago when Walker hit at a .357 clip with two homers in a World Series loss to the Boston Red Sox.

Originally signed by the Montreal Expos as a non-drafted free agent in 1985, Walker debuted in the big leagues in 1989.

Walker was named the National League’s most valuable player in 1997 when he hit .366 with a career-high 49 homers and 130 RBIs for the Colorado Rockies.

He also collected 2,160 hits in 1,988 regular-season games with Montreal, Colorado and St. Louis.

Walker led the Rockies to a playoff berth in 1995, the franchise’s only post-season appearance, and also hit at least .360 in three straight seasons (1997-99).

with files from Sports Network