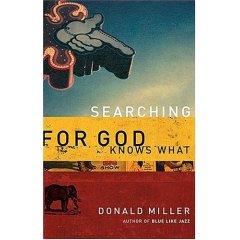 i just finished a book by a guy named donald miller called “searching for God knows what.” it deals with the idea that Christianity is taught to us & often practiced as though it is merely a formula that is to be followed; a good moral code, a list of do’s & don’ts that should be followed at all costs. sounds good, right?

the problem with that, according to miller, is that it isn’t what Christ & His followers were to be about – instead the life of the Christ-follower is to be about relationship. basically stated, it is to love God & to love others. we relay to others that we are Christ-followers by our love (ala the Gospel O’ John 13:34,35)

it’s a very good book that at the same time is very disturbing, not so much for it’s content, but for the way it contrasts Christ’s stated purpose for the Church & also what we have made “the church” – a religious institution that is most intent on perpetuating itself, along with a distinct moral, social, & political agenda that often don’t even come close to representing the Christ who saved us. ya oughta take a look at it.

6 thoughts on “searching for God knows what…”