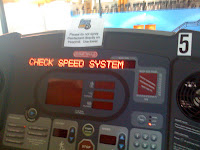 This is a note about the demise of #5, the treadmill pictured at left that is having issues with her speed system. I took this picture in the hopes that she’ll rebound soon. This is the story of how I came to love #5.

I’ve never been much of a “runner” – meaning that working out for me has always meant weights, some cardio (jump-rope, ellipticals, etc.) & whatever sport I happened to be playing at that time. There have been a couple of exceptions – when I was going into 7th grade, i reaaaaallly wanted to drop weight so that I could play in a lower football division (back in the days of Pop Warner weight class based leagues,) so I ate lots of salad & ran around the block several times a day. It worked. I also picked up the habit of eating my salads without any dressing on them; further, I had a hard time with the whole “eating lettuce with a fork,” so I would just pick it up & eat it. Still do.

I also like to run to clear my head – so when things would get noisy in there, I’d go for a run through the streets around my house – often at night. At some point, I found that I really liked the solitude of running, the night air, & being able to wear one of those cool Neon Yellow Vests so that I wouldn’t be invisible to vehicles… still, running was really only done sporadically.

Then something changed – a few years ago, a group of friends started training for a marathon – using the Galloway method, I found that I could run a lot longer & farther than I’d ever been able to before. I was able to go 10K no problem… only to find that my surgically repaired right knee (& the 2 pins in it) didn’t like the distance running… & would let me know about it. Being heavier than I wanted to be also put stress on my hips, knees, & ankles, from the pounding on the streets & sidewalks.

I didn’t end up running the marathon (made it to a 1/2 marathon,) but I kept running – & as long as I kept my distance at about 3-5 miles a couple of times a week, my body seemed to recover well. 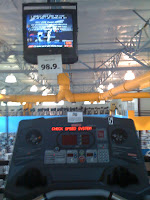 I lost some weight (about 3.5 stones) & got used to running the streets about 5 times a week… this last March, the combination of running & playing softball 2x/week left me feeling it in my hips, knees, & ankles again. I missed running & didn’t want to stop, so I started running on the treadmill at my gym… & after the learning curve (the process of learning to walk then run on the treadmill without holding onto the rails,) I came across #5. I’d tried several other treadmills & they all had issues – they were poorly placed in respect to the TV that was tuned to ESPN (see photo at right) – others wre always dirty, or made too much noise for my tastes; a couple would wildly fluctuate their speed & buck like a bronco (I was only thrown twice…)

#5 didn’t have any of those issues – just kept on going, doing her thing. Always clean, always under the TV tuned to ESPN, never bucking. Soft cushion met every step, allowing me to run as often as I wanted. Not outside, but in the cool of the gym, running in place, thinking on everything & nothing. It became a date – if I went to the gym to run, it was always on #5…

And then there was Wednesday – I was at the end of a 5K. Literally as I took the last couple of strides before my cool down, #5 abruptly seized up & ground to a stop. There was a subtle humming noise… a message appeared: “CHECK SPEED SYSTEM.” I tried to do a reset. No response. NO! #5, come back.