We’ve been smitten with intermittent internet – which of course means that when I want to get on & check for pictures of Weezer’s soccer game, or set my fantasy baseball lineup, or check out the Blue Ridge Highway vineyards, it’s not available. Usually, it’s only dysfunctional for about 2 hours at a time, but today we’ve been experiencing a higher level of unavailability. Sigh.

NOTE: I ended up posting this on our way to the Villa Appalachia Winery – found some free internet advertised, & borrowed it for 10 minutes. Thanks, Al Gore.

Yesterday, we took the afternoon to head the 22 miles on 8S to go to Floyd, Virginia. Floyd only has 1 stoplight, but it is quite the Mecca for music & the arts – the entire downtown (all 3 blocks) is set up for street musicians – with little brick cul-de-sacs & benches set up for visitors & locals to wander by & listen. In our 20 minute walk, we came upon 3 separate art galleries, where many local artists have their work displayed. Sculptures, photographs, paintings, & drawings.

All of the businesses we visited, from the coffee house/bookstore combo (The Black Water) to the Oddfella’s – restaurant offering French cuisine with an Appalachian flavor – there were musicians playing – some from Floyd, but many who were driving in from as far as 100 miles away for the Friday night happenings.

The main ‘event’ in town, the one that Floyd is famous for happens at the Floyd Country Store, & is called the Friday night Jamboree. People started showing up for the 6:30 event at 3:30; fortunately, theBean & I were able to get a helpful running commentary from the regulars – a group of very welcoming, friendly people, who explained in detail what was going on to us & the other 1st timers.

From 5:30 on, the Floyd Country Store shuts down the back ½ of the store, & sets up a dance floor around a mini-stage. There’s also about 200 chairs around the dance floor – we made our way to our seats about 20 minutes early & it’s a good thing, as the whole room was filled. At 6:30, the STATEMENTS (a band made up of 4, 16-22 year olds) led off the evening with the customary 1 hour of blue-grass gospel music, which people can sing along to, but that no one gets up & dances to. The songs ranged from “I’ll Fly Away” to “Amazing Grace,” & there were lots of songs about heaven & what comes next. Before you start bemoaning the experience that we ‘got’ to sit through, let me tell you: it was one of the most incredible musical performances I’ve witnessed personally. There was phenomenal flatpicking on the acoustic guitar, mandolin & banjo. Guys growing up in other places in the US might hope to become guitar heroes. Here, in the Appalachians, they aspire to master the banjo. And as hokie as you might think that sounds, it was really impressive to watch, & a privilege to be a part of. Wow!

After an hour of gospel, band change – 2Old, 2Young – 2 old guys, 2 young guys. I was informed that this was “the dance band,” made up of violin (fiddle) stand up bass, guitar, & 5 string banjo. This is when the dancing started – the clogging & flat-footing. It is accentuated by the noise made by the taps on the bottoms of shoes. Incredible, with an occasional square dance thrown in.

It was fun for me, knowing the history & a bit of background about those that settled in the Appalachians: largely Irish & Scottish immigrants. It was easy to hear the influence of ‘Celtic’ music in the bluegrass; then, watching the clogging/flat-footing, you can see the similarities with Irish step-dancing. People of all ages, 3 to 90, danced solo, danced with partners, danced in 4somes. They danced with their arms by the sides, & the guys often had their hands in their pockets. Really, a sight to behold.

We hung out for a couple of hours, then went for a walk in the rain – back to our car. I had something in my right eye that turned it blood red (no, don’t think it was peroxide. This time.) So we went home to watch the Olympics.

Every day, including Friday, we’ve spent a chunk of time in counseling, talking through & about how we communicate. I think that we’re both seeing that we are growing from even where we were 1 year ago. And we’re understanding each other. It helps to get an evaluation from someone like Chuck too – someone that knows us & has for years. He encouraged us that we’re doing really well in how we’re working through our stuff – as people, as a couple, & as a team. For me, I want to grow… to know & love God more… to know & be known by others; to love people.

We have talked about church as well – in general, & with some specifics (which is fun, because Chuck knows our local context, Hillside, too.) And to hear his observations about us & Hillside… that we’re following a ‘simple call’ to a “long obedience in the same direction.” I thought that was cool, as that’s the book I’ve been revisiting this week, & have recommended to about 4 people in the last month – & to have him use that as his analogy, & to have him recommend it to both of us to read was a point of encouragement & confirmation that we’re on a good track, albeit one that is different than many; a unique journey, one where’s there’s not many footsteps of others to follow or to walk in. 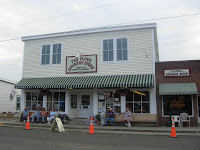 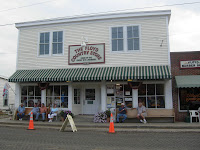 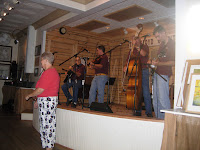 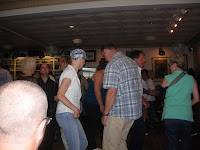 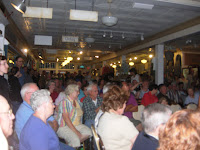