Bean & I started our trek into Blacksburg with a stop at Starbucks, a beautiful brick building on the edge of campus – interesting to see the area almost totally empty, knowing that in about 3 days, all of that is going to change as students descend on the campus for the Fall semester. A person we talked to described it as the ‘coming of the locusts.’ I hope to see it… from a safe distance of course. From there it was on to the Campus Store, where one can purchase all things Hokie, (no pun intended). All I could see was wave after wave of orange & brown. I picked up a couple of hats & a shirt for the kids. Don’t tell them, as it’s a surprise. 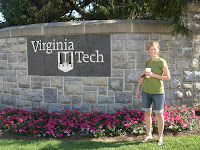 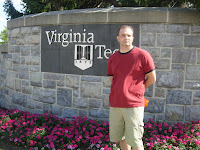 We walked the area around the campus entrance for a few minutes & took the requisite pictures in front of the sign at the entrance.

Actually, we took more than a few pictures, but with the combo of our camera, the time of day (about 4:30 which isn’t late, no, no, it’s early, early…) & my technical expertise, we didn’t manage to get any usable ones. Which, for fans of digital cameras, you can know is quite the accomplishment. Yay me.

Suffice it to say: lots of rolling green grass, row upon row of trees… a really nice place… & almost completely devoid of people. Except a couple of over-achiever early arrivals (probably engineering students…)

We left for Salem, VA to catch the Avalanche game with the Braves affiliate from Myrtle Beach – the Pelicans (who wore a baby blue ensemble that would have made Stacy & Clinton cringe.) Bought box seats ($8/each) in the 4th row behind the home dugout. Turns out the Avs are in last place. There was a lack of energy in the place, (dugout included) that even theBean noticed. Throughout the game the ‘energy lack’ showed up with uninspired play at times, a few defensive miscues, 3 separate baserunning (or base-coaching) issues, 3 times having the bases loaded, 3 times not scoring. Ouch.

No matter. We were at a baseball game. The weather was beautiful, the setting was next to perfect. No one was around for 3 or 4 rows, though Annie Savoy was in the front row, greeting all the players (& coaches) every time they ran off of the field. Living out the local version of Bull Durham… Weird.

By the 6th inning beer goggles & beer muscles were in full-effect. TheBean & I laughed constantly, esp. because the Appalachian accent gets more pronounced in proportion to the amount of beer consumed. Very nice.

All kidding aside – there were many, many highlights from the night – one of which was watching the ‘community’ – people who attend the games with season tickets – interacting with each other, catching up, being in each others lives. Made me long for next year when Reno gets our own team (actually Tucson’s team. Thanks Tucson!) To be able to hang with family & friends is something that I’m really looking forward to.

Again, baseball is beautiful. I took some pictures of the field, & got a semi-closeup of Koby Clemens, catcher for the Avs – he didn’t play, but…

After the game (stayed through the last out, baby!) we exited the parking lot without any trouble – & drove the 25 minutes ‘home’ to CSR, with only a stop by McDonald’s for dinner. I needed to get my 5 Double Cheeseburgers for $5. In our living room, theBean ate leftover scallops from Outback, while I scarfed my burgers. We shared some Gnarly Head Cab & watch a couple episodes of “The Office” – Season 3, w/the deleted scenes. The Diwali episode was priceless.

Ahhh. All in all, a very nice day.

And now the pics – enjoy! 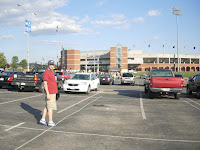 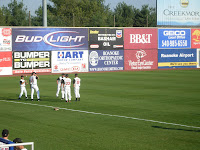 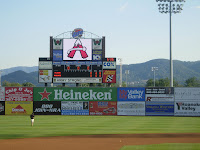 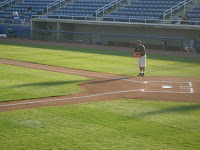 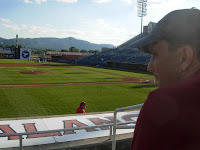 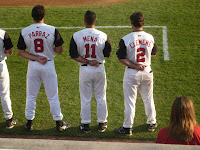