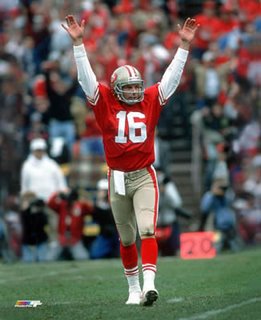 Joe Montana is one of my heroes. When I was 10, the worst team in football, the 49ers, drafted Joe Montana in the 3rd round. (I know, they are once again among the worst teams in football – but as long as they beat Da Raiders this week, they will at least be able to say, “We’re #31!” But I digress.) It was a perfect time for me to engage with pro football – I had just started playing the game myself (Pop Warner) & the local (Bay area is local to Reno, if you squint hard enough…) team brings in a guy that has a knack for finding a way to win games that seemed like they were done & over.

Montana’s tenure as QB brought 4 Super Bowl victories. 3 Super Bowl MVP’s. Several years of watching a wispy guy with a so-so throwing arm lead the 49ers to victory. My favorite Montana moment was in Super Bowl XXIII XXIII Recap (that’s 23 for non-Roman Numeral types) where the Bengals of Cincinnati were overcome in the last minute for yet-another-come-from-behind-victory via a TD pass to John Taylor. I remember that moment as vividly as if it were yesterday. I was working as a Domino’s pizza delivery guy, (busiest day of the year is Super Bowl Sunday, BTW) & had the good fortune to be called to deliver 8 pies (industry slang. I’m an insider, don’t you know?!) to a hardcore 49er fan that wouldn’t let me leave his house. He made me (twisted my arm!) sit on his couch, eat a piece of the pizza I’d just delivered, & watch the entire last drive. After, the TD, it was bedlam. The dog was the most excited out of all of us, though I think it had to do with the pizzas that fell to the floor when everyone jumped up when the touchdown was scored. We all kinda looked like Montana does, in the picture above left. I cried when he left the team for the Chefs (sic). I cried again when he retired. Never met him. Hope to, though.

Which leads me to another hero: Jerry Cook. He’s the guy in picture on the right. I met him via his book, Love, Acceptance, & Forgiveness in about 1981. It became a staple in my “Books To Read On A Yearly Basis”, along with The Chronicles of Narnia, and C.S. Lewis’ Space Trilogy.

Jerry Cook helped a pessimistic (realist?) & often cynical churched kid & sometime PK see how the church could be. Should be. Functioning with Christ’s Love. Acceptance. And Forgiveness as core values guiding the behavior of those within the church towards each other & towards those not yet there. The Jesus Jerry talks about, knows personally, & introduces to his listeners/readers transcends style, culture, national origin, gender, & age groups.

This absolutely transformed my thinking & I believe is largely responsible (along with a praying mom, several divine interventions & redirections, & lots of grace,) for me being, doing, & thinking what I be’s, do’s, & thinks. (Interestingly, when I met my friend Johannes Livelli for the first time, we just hit it off. Immediate connection. Like we’d been friends for years. I found out later that one of our biggest commonalities is our church/Jesus view were shaped by Jerry Cook – me by the books I read, him through a 7 month internship he had in WA with Jerry as his overseer. Lucky!)

I met Jerry for the 1st time in 1999; he is an authentic, engaging, compassionate person, & is a lot like what I think Jesus would be if you met him on the street. Tonight, I get to hang out with him (and a few of my closest friends too.)