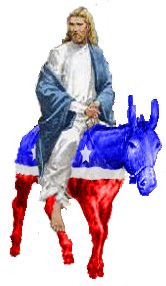 At a church in Washington, hundreds of committed Christians met recently and tried to map out a strategy to get their values into the political debate.

But these are not the conservative Christian values which have been so influential lately. This is the religious left.

“Jesus called us to love our neighbor, love our enemy, care for the poor, care for the outcast, and that’s really the moral core of where we think the nation ought to go,” Dr. Bob Edgar, General Secretary of the National Council of Churches told CBS News correspondent Russ Mitchell.

The National Council of Churches represents about 50 million Christians in America — the majority of them mainline Protestants.

He calls this movement the “center-left” — and it’s seeking the same political muscle as the conservative Christians, a group with a strong power base in the huge Evangelical churches of the South.

But the left has its own Evangelical leaders, such as the Rev. Tony Campolo.

“We are furious that the religious right has made Jesus into a Republican. That’s idolatry,” Campolo said. “To recreate Jesus in your own image rather than allowing yourself to be created in Jesus’ image is what’s wrong with politics.”

2 thoughts on “And now, a left turn for Jesus…”