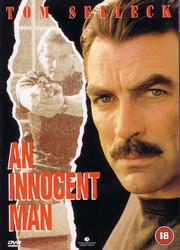 Today in my “Prisons in Cinema” class, we’re watching the 1989 Tom Selleck movie “An Innocent Man”. A good chunk of the movie was filmed in Carson City at the medium security prison; as i remember, it was big news for CC to have A) a real Hollywood movie made in town & B) to have a real live Magnum PI visiting the micropolis.

I was working for Domino’s Pizza at the time (11/88-2/89); one of the ‘perks’ of driving for Domino’s is that you get to deliver pizza’s all the time to people that order them. (Try & contain yourself at my grasp of the obvious. Just try.) Anyway, one fine Friday evening, I was driving & delivering in the manner & style that earned me the “Domino’s Pizza Hustler of the Month” award for 2/89, when the manager, Tom, & owner, Jerry, pulled me aside to let me in on a special privilege that I had been accorded. Evidently, this fine Friday evening was the date that the cast party for “An Innocent Man” was happening at the Happiest Place In The World -HPITW (anyone, anyone?) & for some reason, this party needed 25 assorted pizza pies from Domino’s. And I was the chosen one; rather, the one chosen to deliver these pizzas to Tom Selleck. Or so I was told.

I loaded up my VW Rabbit with the pizzas, & was given a phone number to call to alert Tom Selleck that his pizzas were ready. I practiced my TC & my Higgin’s voices while I drove to the HPITW so that I could have a witty interchange with Magnum. The problem was that there was no parking at the HPITW – so my attempt to park was stymied, probably because Magnum was in town. Still, I was on a mission from Tom & Jerry to get Tom Selleck his pizzas, so I parked the car in the walkway of the HPITW, & ran to a pay phone (pre-cell phones) to call Tom Selleck to set up where he wanted to rendesvous to pick up the pizzas. Parking on the sidewalk seemed like a good idea at the time. The problem was that the HPITW security guards didn’t approve of my park job, & told me so. I couldn’t be bothered with these trifles – I was on my way to deliver pizzas. To Tom Selleck.

The guy who answered the phone at the number at the HPITW was not Tom Selleck. He sounded annoyed & told me in no uncertain terms that under no circumstances was I to move from where I was in the entry to the HPITW. He would be down in a couple of minutes to pick up the pizzas. No mention was made of Tom Selleck. I asked if he’d be coming too, & didn’t get a response. That I can repeat, that is.

About 5 minutes later, 3 guys that looked like escaped roadies from the GnR tour, or carnies that had lost their way came towards me. How surprised was I to find that they came to me & asked where the pizzas were. No Tom Selleck.

After hooking up the guys with about 8 pizzas each (one lucky guy got to carry 9) I asked why Tom Selleck didn’t come down for the pizzas himself… Really, I did. No answer, just a little roadie giggle or two. Then, I checked to see if they needed me to follow them up or help them to the cast party. They didn’t. They just took the pizzas & left. No Tom Selleck. Bummer.. The security guard was in a frenzy at that point because of where I’d left the Rabbit. He had called a tow-truck – good news for me, it takes tow-trucks in the CC about 3 hours from the time they’re called to show up. I climbed back into the Bunny & it was back to Domino’s for me.

That’s what I’m thinking of while watching “An Innocent Man.” That, & I’m practicing my TC voice. And Higgins too.