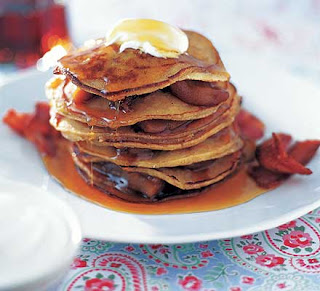 I love pancakes, but I rarely eat pancakes. A few years ago, I discovered that the “I feel like I’m going into a coma” feeling that I’d get after slamming down a few was not something that everybody experienced… there is a name for it, but the jist of it is that my body doesn’t do well at processing the mass quantities of sugar that syrup has in it…

Diet syrup isn’t an option, so my method of ‘dealing’ with the reaction to pancakes (& a few other foods) has been to modify how I eat – drop the refined flours & sugars, high protein & complex carbs are the norm…

But I still like pancakes & will plot a couple of times per year to indulge… & make sure that I incorporate some high-protein food (usually sharp cheddar cheese) to eat before, during, & after the pancakes… it doesn’t fully stop the coma-reaction, but it does curb it a bit…

So I plot, (the anticipation & waiting is almost as good as the actual eating,) & save up for Christmas/New Years Dutch Apple. The (formerly) 1x/semester Tri-Delta Pancake extravaganza. An occasional home-based celebration. I believe that it’s time for a bacon stack… Let the preparations begin.

And …here comes the sun…. Looks like the weekend is finally bringing temperatures in the 80s & 90s. Ahhhh.

The wind blows gently, & I love the peaceful coolness, bringing relief from the heat of the day. The evening wind comes like a gentle caress, lingering sweetness. The wind blows hard, picking up sand & rocks, pelting & stinging all they come in contact with. The biting cold, a violent & unseen rage. What’s changed?

I don’t think that the waves are intentionally buffeting my little ship, tossing it to & fro, bringing it perilously close to the rocks & the reef… the waves are just… the waves.

They’re driven by unseen but very real forces, & the waves do what waves do. When the seas are calm & gentle, I love them. When they’re wild & fearsome, I’m wondering why they’ve turned their intensity to me.

Sigh. I’m glad that the One who calms the wind & the waves knows me.