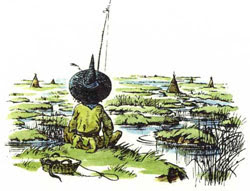 It’s #2 sons 14th birthday today – tomorrow, early in the a.m. he & I are off to San Francisco for a one-day speed tour of the City. We’re going to AT &T Park for a tour; to Ghirardelli Square for some chocolate & na-nas; to Pier 39 for… Pier 39. And maybe the Hard Rock Cafe. And then we’re off to the University of California-San Francisco (UCSF) Medical Center. Why a hospital?

#2 son has been asking a lot of questions about my brother Johnny – wanting to know him, reconstruct his likes/dislikes, experience the personality of the one uncle that he knows only through pictures, a few home videos, & the stories of those who knew him. A part of Johnny’s story involves his battle with cancer – & UCSF is where almost 5% of his life was lived – for treatment, recovery, & the like. And #2 son wants to know this place – & as difficult as it is for me to go there, with the painful memories, sorrow, & loss… we’re going.

Makes me feel a bit pensive – leaves me wondering, examining how I see the world, or how I view it. The lens through which I see it, a lens that I believe I am responsible for putting on/taking off. Watching the news, checking in with Drudge, hearing story after story of the dismal economy, holiday season layoffs, record high home foreclosures, equally high number of bankruptcies, & a war in the Middle East that just doesn’t seem to get any closer to resolution… a lens of ‘reality’… reminds me that I want to, I need to choose something different.

I don’t want to choose negativity, to speak words of ‘reality,’ death, nitpickiness, complaint, slander, criticism, harshness, destruction – over & about me or others. I think that I’m finding that a person will find just what it is that is looked for. And if my lens is negative, down, destructive, ‘reality based,’ I will find those things – & think on them. Talk about them. Spread the cloud of negativity like a flu-virus in the wintertime spreads.

I’m challenged to take on a new lens, one that almost feels forced, like a new pair of glasses that have never been worn, all the while knowing that the new glasses are the right prescription, & they fit like they should – but I’m so used to ill-fitting, poorly prescribed glasses that the real deal, the good ones don’t seem right. Its upside down, & I want to be right side up.

The new lens is to look to enjoy life’s relationships – rather than to pick them apart as inadequate, to place blame where its due -instead to be a radical extender of grace, esp. where it’s not ‘deserved’… as if I have deserved it ever? To look for joy instead of sorrow – to hope & to be filled with hope, even when the ‘track record’ tells me otherwise. To have faith, to believe against all odds that the One I serve really is able to move mountains. To perform what He says. To rescue. To deliverer. To transform.

Maybe this makes me an optimist. A deny-er of so-called reality… So be it. And my answer to you is:

Suppose we have only dreamed, or made up, all those things – trees and grass and sun and moon and stars and Aslan himself. Suppose we have. Then all I can say is that, in that case, the made-up things seem a good deal more important than the real ones. Suppose this black pit of a kingdom is the only world. Well, it strikes me as a pretty poor one. And that’s a funny thing, when you come to think of it. We’re just babies making up a game, if you’re right. But four babies playing a game can make a play-world which licks your real world hollow. That’s why I’m going to stand by the play-world. I’m on Aslan’s side even if there isn’t any Aslan to lead it. I’m going to live as like a Narnian as I can even if there isn’t any Narnia…. [W]e’re leaving your court at once and setting out in the dark to spend our lives looking for Overland. Puddleglum – The Silver Chair, from The Chronicles of Narnia

Here’s to looking for Overland.