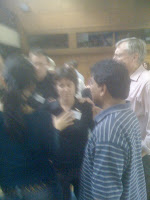 The conference wrapped up with one pastor from each region, ‘the regional leader,’ giving some prayer points for their region – North, South, West, & Middle – there’s really nothing going in the FEGW in the former East Germany – not for lack of trying over the years, but the difficulty & opposition is great.

After hearing from each leader, all of the pastors represented from that region stood up, & people gathered around them to pray for encouragement & also for the specific requests that we’d all just heard. 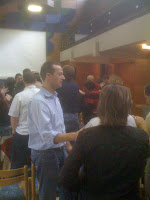 Afterward, we had a few minutes where we could ‘break bread’ with each other – pull a chunk off of a flat, garlic loaf, & go to another person to share with them (the bread.) Part of the sharing was to be an opportunity to pray blessing on each other. It was a very moving & powerful time together. I was really touched by the prayers & blessings prayed over me… and by the number of people who said encouraging things to me.

This is the 3rd year I’ve been at the conference, & so far I haven’t ‘done’ a whole lot – just got to ‘be’; spend time with people that were interested in spending time with me, usually over meals & in the gemeindeshaft (fellowship :) time after the service in the bistro – answering questions, listening quietly, & trying to pick up as much as possible what was going on around me. I go because I was invited, & because I feel a ‘call’ to support the pastors & leaders of Germany – I do that in prayer, at home, but also by being present, & by looking for a person that seems open to talk & get to know each other (aka “the hungry bird” -) It’s trusting in God’s Sovereignty for provision in the connections that I am to make. It’s how I met Roland & how Julia has ended up in our house. 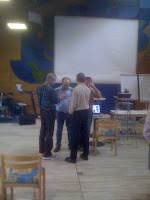 It seems that this year, more than the others, I can feel the acceptance & belonging – I heard from at least 10 people that being present, again, is a point of encouragement, for several reasons: