Started commenting on this in my previous post & got carried away…

Tuesday night TV watching for Witta Woowie Wocke (1 hour) was devoted to “The A-Team” – in the post-VietNam USA, something was needed to make the people of the country feel good about our soldiers & the travesty of an unwinnable war in Viet Nam. Apocolypse Now didn’t make us feel good, & Magnum PI was pretty intense as well in the way the show had dealt with the very real & very serious issues faced by vets as they attempted to reintegrate into society. The A-Team came at the topic from a slapstick action-adventure TV show, where no one ever got killed or hurt, despite the 3.2 billion bullets fired & bombs exploded in each episode of the show. 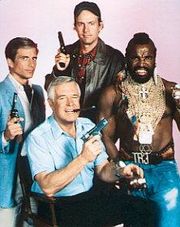 The premise of the show was that duh-duh-duh-duh…in 1972, a crack commando unit was sent to prison by a military court for a crime they did not commit. They promptly escaped a maximum security stockade into the Los Angeles Underground. Today, still wanted by the government, they exist as soldiers of fortune. If you have a problem, if no one else can help, and if you can find them, maybe you can hire…

Think about it. These guys, the A-Team, a group of all-around good eggs, serve as soldiers of fortune, usually for free, as modern day heroes that rescue the poor & underprivileged of society. Still, they were accused of a crime that they didn’t commit by the Evil Military Establishment (the same guys, no doubt, that forced John Rambo to retaliate after they took “First Blood.” But that’s another post.)

Here’s a run down of the main players: