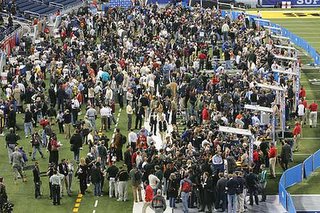 Here are some truly incredible answers to questions asked of the Pittsburg Steelers today at the all important, can’t live without it, MEDIA DAY. This annual event falls on the Tues-deee before the Super Bowl & is always the source of much entertainment & joy for me… I guess inanity is guaranteed if you put a microphone in front of a football player (without his helmet on I might add,) & ask them questions until they pass out…

(3) Hines Ward: “Winning the Super Bowl would help me get solidified.”

(5) Ben Roethlisberger: Ben mentioned that we are fighting a war in Iraq. As soon as he said this, about 25 guys wrote it down. Roethlisberger also stated that Sunday’s Super Bowl would be much bigger than any game he played at Miami of Ohio; about 30 guys wrote that down.

(8) Willie Parker: “Every day of your life, you need to do something to your body. You need to sit in a cold tub of water, or whatever.” (I suspect this might have made more sense within proper context. However, Parker also admitted he elected to play football at the University of North Carolina because he loved Michael Jordan, which seems insane.)

(9) Punter Chris Gardocki was asked whether he thinks about having his punts blocked; this is because he’s never had a punt blocked (in 221 career games). He says you can’t think about having your punts blocked, because that will cause you to have more punts blocked.

(10) Joey Porter, back for more: “Football is the best way to heal any situation.” This slightly contradicts the world view of Polamalu, who casually mentioned, “The nature of a man who has a competitive spirit will be to inevitably live a life which involves that man overcoming obstacles. But the sport of football is too physically and emotionally difficult to play simply for money or success. Personally, I have been inspired by God.”

2 thoughts on “Media Day In D-Town”