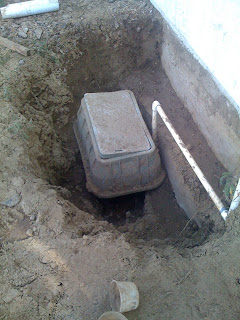 Down in hole, feelin’ so small… was how Brother & I spent our Tuesday. Not that we’d planned it that way. Sort of fell into it when I was greeted with the sound of many waters… that sound is a really good thing if you’re reading the book of Revelation, but it is decidedly NOT a good thing when one is standing inside a church building, hearing the echoing of running water through the pipes in the walls…

A call to thePlumber brought the desired result – a visit from an expert. Turns out our expert could only confirm that:

Digging is something that our expert could do, but it would cost. And since I have a thing about not selling my kids off, or auctioning arms & legs, I decided that I would dig. And so would Brother. And so we did. Even though Monday would have been a better day to dig, considering it was S/O weather, instead of the driving snow, biting wind, & occasional ball of hail falling from the grey skies…

I know the hole doesn’t look so impressive, especially with the sprinkler box strewn so haphazardly over it to cover the work that we did until our friend Jim-The-Sprinkler-Man-Taylor comes out on Friday, but I have to say that I am proud of the work Brother & I did. It was so easy to dig in the lush Nevada soil. Made me so happy that unlike many other states, Nevada soil has no rocks in it. None. Just lush, rich soil that gives in to the shovel like ice-cream does to a hot ice-cream scoop.

Actually, I must say, we worked for most of the day, & found that even with the water mains off, we still had a hole that filled with water in approx. 10 minutes. We bailed & bailed but couldn’t keep up with the leak. I got tired after removing about 75 gallons of water (in 5 gallon increments, don’t you know?) & still making no head way.

That’s when my edu-ma-cation kicked in & I realized that there HAS to be a better Way of doing this… Images of water pumps rolled through my head & after a quick visit to our friends at Ahern Rentals we came away with a 2″ water pump & 50 feet of fire hose to Clear the hole of water in No Time. Turns out the pump worked well, but only kept us at EVEN with the leak… We were stymied, cold, & wet… so we cried out to the LORD. Truly. The ladies intercessory group in the parking lot (so fortuitously meeting on Tuesdays) prayed as well. And the LORD heard our prayers & sent us exactly what we needed: a foreman.

When I say what we needed was a foreman, that’s just what I mean. Imagine if you will Brother & I, tired & work-worn, leaning on our shovels, resting, pondering what would come next. What I didn’t realize is that we hadn’t met the appropriate “shovels/workers ratio” to finish a given job.

The arrival of our foreman, aka real NV Energy Superman John-the-Wiser took us up & over the ratio… Plus, he seemed to know a few things about Plumb-age… spotted a few things we’d missed, like an alternate water valve that miraculously turned off the water to the leaky valve, thereby allowing the pump to catch up & even surpass the water in the hole. Brother dug with renewed vigor, & found the source of our problem, that ancient evil known as “the leaky irrigation valve…”

With the valve now exposed, we were confronted with something that neither Brother nor I had considered… it was suggested by John-The-Wiser that since the valve that was leaking was Good For Nothing, & fed nothing but a previously Vandalized & Broken line itself, that we should cut the valve off & cap it. Ourselves.

After a few minutes of hemming & hawing, we agreed. In fear & trembling. Brother did the cutting, under the watchful, skillful eye of John-The-Wiser… we purchased a 1 1/4″ Brass Cap & applied it, with a little smidge of plumber’s tape. Tightened it up. Tested our work by actually turning the main water valve on. It held. (It must be noted that Someone said we should probably just fill the hole up with dirt 1st, & THEN test it, but Someone was overruled.)

I want to give a big shout out of thanks to: